BLOOMINGTON – It was supposed to be a two-day, 36-hole tournament, but weather on Friday did not cooperate, as rain, cold, and snow came down and eventually cancelled the first day. Junior Will Troy took advantage of the mulligan, and came back on Saturday to finish third individually in the IHSA Boys Golf Finals at The Den in Bloomington.

Midway through the tournament on Friday, the IHSA had determined that all scores would be discounted, and an 18-hole championship would be played on Saturday. Troy did not play terribly on Friday, as he was 1-over through 12 holes, and tied for 14th place. However, on Saturday, Troy came out firing, having birdied three of the first five holes. He led most of the day, before having trouble on the front nine, scoring two bogeys and a double-bogey to close out the day with a 1-under-71. That, combined with the hot play of Lockport’s Ben Sluzas, who birdied three of his last five holes and eagled on his final hole of the afternoon, was too much for Troy.

Still, it was a successful day for Troy. He became the fourth person in Waubonsie Valley boys golf history to finish in the top 10 of the IHSA Finals. Jason Marrs finished fifth in 2013, Alec Meyer finished ninth in 2011, and Thomas O’Bryan was state champion in 2010. 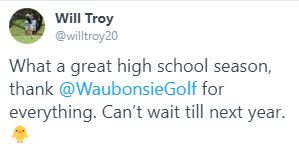 “What a great high school season,” Troy tweeted out on Saturday. “Thank @WaubonsieGolf for everything. Can’t wait till next year.”