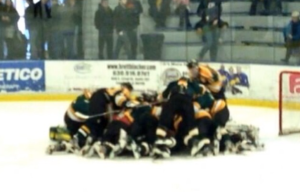 The Warrior Hockey Club beat Rockford, 4-3, on Sunday, to advance to the AHAI State Championship at the United Center. Rockford had been up 3-1 to start the third period when the Warriors hit the Icemen with a flurry of goals, two of them in a 41-second span, to tie the game. The Warriors took the lead for good with 6:58 left in the game. This was only the third time in the last 18 years that Rockford will not make an appearance in the championship. Michael O’Hara scored the first and last goals of the game. Tommy and Jacob Stobart each added goals.

Waubonsie will take on Glenbard in the championship game at the United Center this Thursday, March 20, at 8:45 p.m.