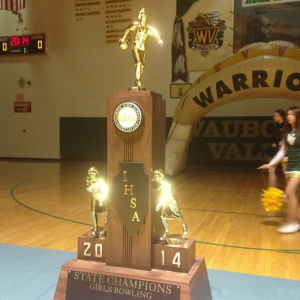 Waubonsie Valley held a recognition ceremony on Monday to celebrate the accomplishments of some winter sports, specifically the IHSA championship brought home by girls bowling. Student-athletes were individually announced to the applause of the student body, who were in attendance.

“It’s pretty exciting and it’s awesome being a part of school history,” said senior and individual champion Julia Bond. “To have this assembly and to have the kind of support that only Waubonsie has is incredible.” Bond averaged a 234 per game in the weekend’s two-day championship.

“It hasn’t really hit any of us yet,” said senior Rachael Felton. “It’s very surreal, but it’s taken a lot of hard work to get here, so we’re very excited that this happened.”

“It’s got to be the best feeling that there is, and to have done this back to back…tremendous feeling,” said head coach Marty Miller. “The girls did just an oustanding job. I’m just so proud of them.”

It’s the first time that a school has won back-to-back state titles since 2002. Overall, it is the fifth state title for Waubonsie Valley High School.