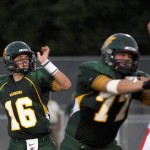 The Redhawks fumbled the ball on the Waubonsie 1-yard line to re-open the game. From there, the Warriors did not look back. Quarterback Zack Bennema drove the team down the field and ran it into the endzone for the first score of the game.

Waubonsie’s defense not only maintained the lead, but added to it, with Nick Horn’s interception return for a touchdown. Central would come back with a touchdown of their own. However, tailback Tony Durns dashed for a 54-yard touchdown run to seal the victory.

Durns finished with 16 carries for 152 yards, and Bennema carried the ball 11 times for 91 yards. Luke Marzano recovered two fumbles for the Warriors. Max Ihry also had an interception in Central’s end zone late in the game.

The Warriors travel to Oswego on Friday to take on the Panthers. The game will be broadcast live online at warriorsportsnet.org.